Despite the weather being grey, cloudy and dullsville all over, I did manage a couple of nice images today.  Sam Williams spotted a Great Northern Diver in Newlyn Harbour, so I decided to check it out. On getting to the harbour entrance the GND had gone to the far side of the harbour,bugger!!!! I decided to wait and it returned in ten minutes with a snack just behind the pier I was stood on. Light was pants but careful selection and adjusting of light levels over the eye in photoshop bought the image to life. A Guillemot appeared for a few seconds also. Then the light went really pants. But I still managed to get some shots of Eider and a Purple Sandpiper, images aren't to bad considering some were shot at around 6400 ISO.   Ok the final images for this year:

Well that is 2010 done and dusted, my favourites this year have to be posts on Chough, Bittern and Kestrel which produced some truely stunning images. A total of 92 different species were featured on the blog, which isn't to bad. A semi finalist gained in the Wildlife Photographer of the Year competition was another good result, my best yet. Switching from Canon to Nikon was another good move for me, rewarding myself with the latest Nikon D3s, stunning camera. Hope you all enjoy the New Year Celebrations and dont take to long to recover.

Posted by Bobbster at 12:25 5 comments: Links to this post

Two record shots off a Great Northern Diver. Due to the high winds, grey cloud which have descended on us over the last couple of days, resulting in poor light and conditions photography is limited. Just need the minus temps and clear blue skies back so I can get something more productive! 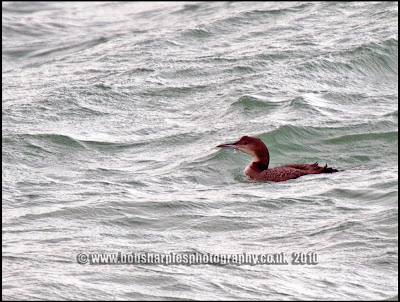 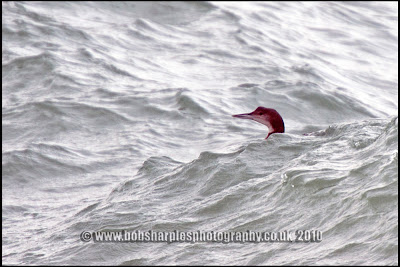 A quick trip out today as for the second day running conditions have been dismal (bring back the freezing temperatures and blue skies!) On the way to Sandy Cove, the yellow thing in the sky popped out so I stopped off a Marazion for an hour, and got a picture of a swan!! Onto Sandy Cove and the murky conditions were in to stay.  Pictures (distant) off Great Crested Grebe and Eider and a bit closer for the Oyster Catcher and Grey Phalerope, but it was pretty dark even for the Nikon D3s. So onto the record shots from today:

Finally after much messing around with computer software/updates/ftp addresses etc I have managed to get a slideshow on line of my favourite 2010 images. Ideally one per month but some months were a bit lean in images. Anyway as a bonus I picked out 16 instead of the normal 12. Some of the images are picked not for quality but content, others because of the difficulty getting the image and the rest because I like them! A small description is below each image and all can be viewed by following the link here:

Wishing you all a happy new year and lots of good pictures for 2011, hopefully!
Posted by Bobbster at 10:02 4 comments: Links to this post

It had to happen, the weather has turned and we now have Strong winds and lots of rain inbound for the next 2/3 days. I did try Marazion, Newlyn, Hayle but no images to be had today (by me anyway) As a result here we have more images from yesterdays shoot. For those who have been away over the Christmas period it would be well worth looking back the last few posts for more Bittern shots. If we get rained off tomorrow as expected I will try to upload a slide show with my 12 favourite images of the year. They may not be best technically but hopefully you will enjoy them anyway. More of yesterday's  Xmas day outing below:

Xmas from Maza and the Daily Bittern is a Stunner.

Celebrate Xmas down the pub or take the camera out on the best day we have had in ages. I chose the latter. After a very disappointing and unproductive morning I was wishing I had gone down the pub etc. Perseverance paid off later with a couple of stunning images. A few photographers out with there camera's so I wasn't the only one to take advantage of the good light today. Enjoy the images:

The marsh is still grip in the Artic freeze, the ice most be quite thick as large stones had been thrown on it to no effect. Amongst the reed beds it looks unfrozen though, so some birds may be able to feed. Activity was rather slow today but some decent photo opportunities presented themselves. I shall get onto the images tonight as I am sure you all be wrapping presents and stuffing turkeys.

Life In The Freezer

Got out today just after sunrise, marsh was frozen but it wasn't to cold. Few shots of Bittern on the ice showing rather well.  So a good start. Then someone turned the wind up and it became absolutely freezing. At lunch had a brew and some solids in the cafe, warmed up again was ready to go. Wind was getting stronger, activity getting less and I had an "ice cream" head. So after shooting a couple of wagtails (with the camera) I called it a day. So more images taken through a lot of cold and effort, perks of photographing wildlife! Tomorrow's outlook is sunny but with cold NE winds, so I could make a couple of hours out but not an all day session.  Onto the images:

Posted by Bobbster at 19:25 5 comments: Links to this post

Arrived at Marazion around 10.30am to be told I had missed all the action, Bitterns flying everywhere and sunbathing. As I walked through the gap in the wall I saw one walking across the ice, sods law, I had stopped to chat for two minutes, another opportunity gone begging. Waited for it to appear from the reeds which it did some two hours later, but being unco-operative it flew off in the wrong direction. After lunch I tried again, unbelievable one flew into the reeds at the end of the fence. I was hoping it would walk out on the ice but it flew instead, but it was so close, shots below. Some excellent lighting for photography was had late afternoon when some more stunning views were had. I often get asked why I visit so Marazion so often, simple it is where the action is at present and enables me to try and get better pictures. It is my intention to try some video, once I get some Bittern images I am happy with. Who knows when that will be? Onto today's images: