I did not witness this event but I was down the other end of the marsh at the time.  Two Bitterns were in the same area. One was on the surface and the other above in the reeds. The one in the reeds became rather aggressive fluffing its feathers and posturing with intent.  It then dived down and chased the lower bird a few yards before pinning it down pecking it and then holding its head under water until it drowned. I was not aware bitterns fought each other to the death. Now, sadly the Marsh has one less bittern and a killer on the loose! Eye witness and detailed report here http://www.cbwps.org.uk/bird_news1.htm 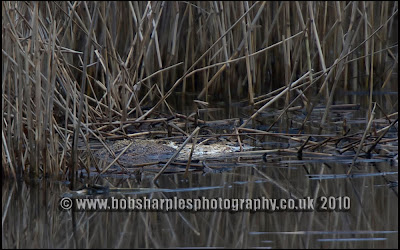 The unfortunate Bittern lies dead in the water, nature is cruel at times
Posted by Bobbster at 17:14

What a shame, and you missed it!!
Great images in the post below.
The falmouth student's did very well with that video!

Something I didn't know either Bob.
A fight to the death; such a shame, for such a 'special' bird.

How sad,i saw two there today.
What a pity,one less.
John.

Raw nature at its best, tragic but the reality of the natural world.

To bad for birders! BUt at the same time im always fascinated by the "law of nature" ;)